For a long time, Ubuntu Kylin community has been actively collecting and adopting user feedback, knowing that users' demand for common entertainment and office software is becoming increasingly urgent, and the problem of too little ecology in Linux environment is becoming increasingly prominent. Now, here comes the good news! ukylin-wine is officially stored in Ubuntu Kylin source and launched on Ubuntu Kylin official website. At present, there are six applications available: QQ、WeChat、Tencent conference、Enterprise wechat、Photoshop and LanXin. Which one best meets your expectations.

ukylin-wine is a software developed based on wine, which is used to run Windows software compatible on Linux system. Compared with wine, it has the following characteristics:

Open "Kylin Software Store" from the start menu, input the name of any software introduced above in the search box, select the version ending with "wine", enter the download page, and click "Download". 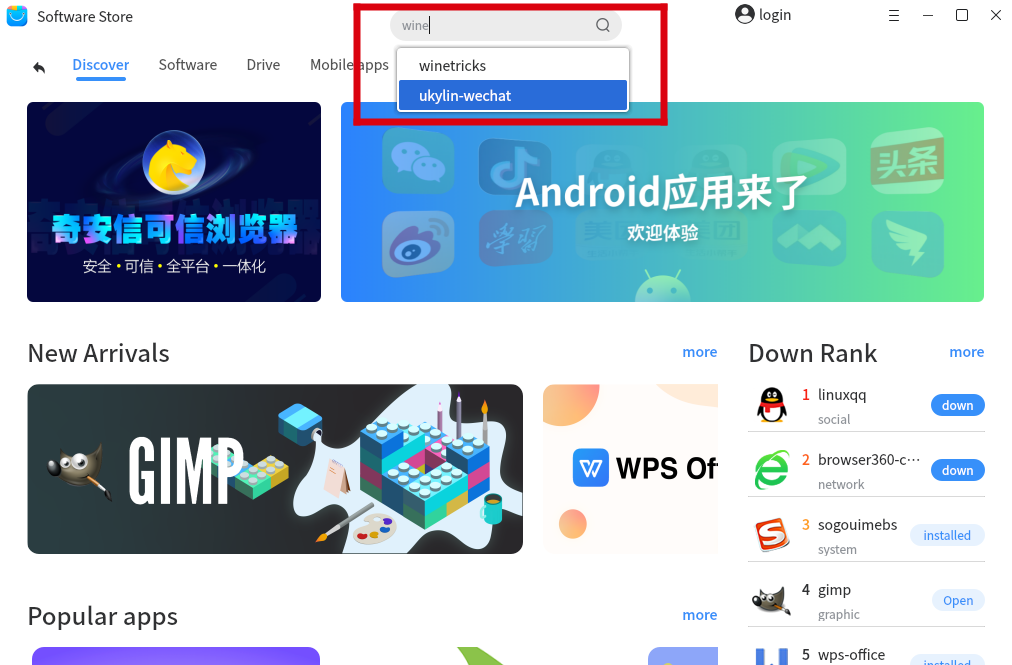 1、Before using the source installation, you need to open the terminal and enter the following command to update the source:

3、If you see this, I believe you have completed the Wine environment installation, and then we can install the Windows program. The following is an example of PS:

4、In addition to PS, the source supports several other applications. After entering the following commands in the terminal, press the Tab key to see the software list~

At present, ukylin-wine is adapted to 6 applications. Among them, a large number of bug fixes have been done for the Windows version of WeChat, which is commonly used in China, so that WeChat has reached a relatively stable state and provides users with a good experience. At present, the main development and testing work of ukylin-wine is based on the open source operating system of ukylin-wine, which runs well. At the same time, ukylin-wine can also be run on Ubuntu and other Deb package management Linux systems.

In the future, ukylin-wine will continue to adapt to new software and fix more defects and problems.If you encounter problems during use, you can leave us a message on the following social platforms

Finally, which app do you most want to be available in the ukylin-wine zone?